QM In The News: Off and Running

in
QM In The News 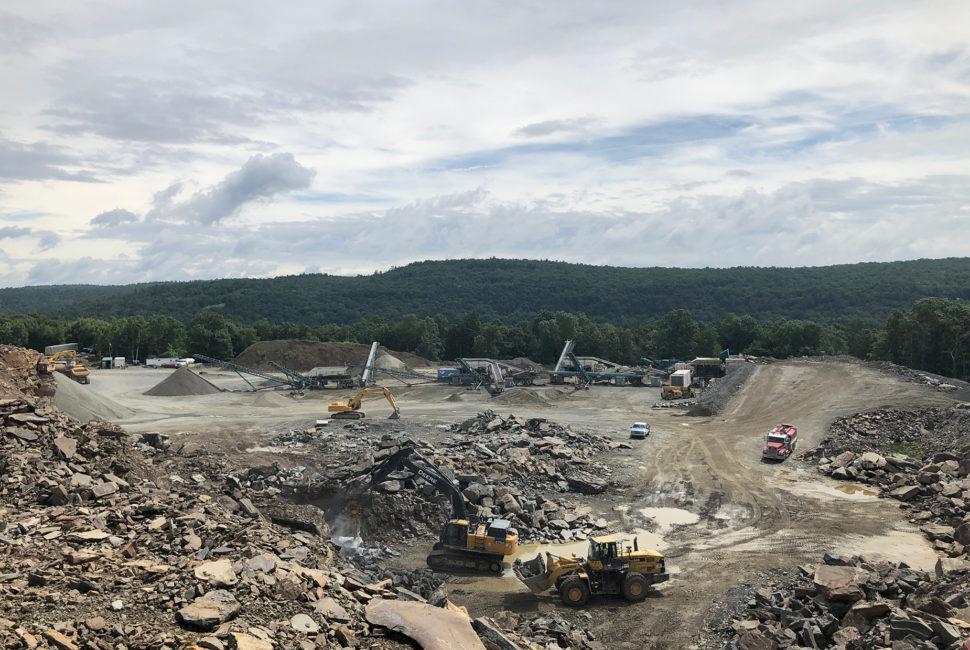 The right equipment, coupled with the support of key vendors, positions a startup operation for growth in the years to come

Steve Caruso came across a report more than a decade ago that planted a seed for a big idea. The report Caruso found detailed how the United States would soon demand more aggregate in a seven-year period than it consumed in the previous century combined. One challenge the nation would face, however, was a depleting number of crushed stone, sand and gravel sources.

“All of the key players and all of the major quarries were near their life of mine,” Caruso says. “If every quarry is near capacity, material would have to come from new sources.”

Caruso saw an opening to get in on the action and start an aggregate operation from the ground up. Ultimately, an opportunity presented itself in a one-time dimensional stone quarry dating back to the 1800s.

The quarry, which had previously earned necessary permits, had been dormant outside the New York City market for years. Caruso and his partners revived the site and began crushing stone that was previously used as tile, flagstone, sills and structural veneer.

Quarry Management, the company Caruso now serves as CEO, brought the old dimensional stone quarry back to life with the support of two key vendors offering the right combination of availability, support and price on processing equipment. The hiring of Pep Hunsicker, an industry veteran who currently runs the day-to-day operation, was also instrumental.

Quarry Management’s operation sits on more than 220 acres, 40 of which are permitted for mining. The company mines a high-friction bluestone that meets the needs of New York City and the surrounding tristate area.

Quarry Management explored its crushing and screening options with a variety of vendors, seeking an electric modular plant or an electric portable spread to get it started. “We talked to all of the usual suspects,” Caruso says. “We found the opportunity with Cedarapids for a multitude of reasons.”

Quarry Management had seen an equipment spread, including a CRJ3255 jaw crusher and a pair of CRC380XHLS cone-screen plants at an Emerald Equipment yard. The combination represented a turnkey solution, from systems to setup to support.

“It’s a good middle-of-the-road startup situation,” says Mike Tormey, owner of Emerald Equipment. “It’s the next step up from a track spread.”

According to Caruso, Emerald Equip- ment and Terex Minerals Processing Systems (Terex MPS), which manages the Cedarapids brand, were quick to put together a solution to his request.

Because of the mine’s tight footprint, Quarry Management sought a compact spread – as well as one that was readily available and had the horsepower to deliver the material the company wanted to produce.

“Their engineers came to the table with a drawing,” Caruso says. “We took that and put it against the industry – probably the top five guys who have similar equipment. When it came to availability, support and price, it was an unbeatable combination when compared to similar offerings that others brought to the table.”

Caruso was not only wowed at the offering Emerald Equipment put in front of his company, but how quickly the dealer could get Quarry Management’s operation up and running.

“Emerald had the equipment on the ground,” Caruso says. And that’s virtually unheard of these days, he adds. “Most iron is 26 to 32 weeks out,” Caruso says. “Mike had it in his shop on the ground. That was one of the deciding factors. We needed to go in 2019, and they were there for us.”

According to Caruso, discussions between Quarry Management, Emerald Equipment and Terex MPS began in December 2018. A deal for the portable spread was struck in February, machines were mobilized in March, and Quarry Management was crushing rock a month later.

“I don’t think there’s a pit or a new quarry in the country that can talk about how that developed that fast,” Caruso says.

THE RIGHT MAN FOR THE JOB

In the process of exploring the spread, Caruso was introduced to the man who currently runs it. Tormey made the introduction for Caruso.

“Mike said, ‘You guys are looking for this equipment and you have great market penetration. I know a guy who could really tie this whole thing together,’” Caruso says. “He’s got 20-plus years of experience at every level of crushing, and he formerly worked with one of the biggest crushing and mining companies in the state of Pennsylvania.”

That man was Hunsicker, who now runs the Quarry Management site as vice president of operations.

“We’ve had great success thanks to his direction and experience, and to a phenomenal plant for its size and what it does,” Caruso says.

Hunsicker, who previously oversaw 26 active quarries in addition to asphalt plants and other sites at another producer, estimates he crushed between 14 million and 15 million tpy across his former employer’s aggregate operations.

Hunsicker’s experience was tremendously appealing to Caruso, who was looking for an industry veteran to manage daily operations.

“I don’t know if there’s another guy – maybe one other guy in the country – who has that type of experience,” Caruso says. When Caruso met Hunsicker, he asked him what he thought the hardest part of the crushed stone, sand and gravel business is. “I said ‘people,’” Hunsicker says. “You are only as good as the people you surround yourself with. You’ve got to have a

great team, from the guy with the shovel to the CEO.” Caruso concurs.
“I have learned that without a great team and people like

Pep, there’s not much you can do in this business except for burn up lots of capital,” Caruso says. “The devil is in the detail. Efficiency is critical. Without the right equipment, the right plant and the right vendor support, you’re doomed.”

When visited in June, Quarry Management was in the process of dialing in its brand-new plant, which was producing about 400-tph at that time. Hunsicker was pleased with the plant’s performance, and he and Caruso see even greater throughput potential for the spread.

Of course, opening up the floor of the old quarry is a process that will take time. As the operation progresses, Quarry Management gains a better understanding of the rock’s characteristics and best practices with its crushing plant.

According to Hunsicker, the geology lends itself to producing beautiful products. A key for Quarry Management, however, is getting material to the crusher at the right size. “That’s the challenge,” Hunsicker says. “It comes out in blocks.”

Fortunately, Quarry Management has received tremendous support from Emerald Equipment and Terex MPS as production ramps up. For nearly a month, Emerald Equipment regularly made available a team of five or six personnel to ensure a smooth launch at Quarry Management. Likewise, Cedarapids representatives were on hand from day one to offer suggestions to improve the plant’s efficiency.

“Mike has a great team just like we have a great team,” Caruso says. “His men are seasoned and trained. He keeps them well-equipped when there’s a problem with a part going down. And Cedarapids has been very quick to ship overnight or next morning.” Uptime is critical for Caruso, and his vendors have done their part to ensure it. “There have been no glitches, no waiting time,” Caruso says. “Other than a couple of items we had to wait more than 24 hours for, there’s been nothing really of consequence that has put us behind. That’s the key element as an aggregate producer. We’re crushing rock. You’re [operating] in a brutal environment. This Cedarapids machine is metal. Stone and metal create problems. It doesn’t matter what brand it is.”

Quarry Management’s goal is to see a return on investment within the first phase of its operation. Though still in its infancy, the operation grows every day, Hunsicker says, and he expects new opportunities to present themselves as he opens up the quarry footprint.

Like Hunsicker, Caruso is excited as he looks to the months and years ahead. And he’s reminded of advice Tormey imparted on him about the plant.

“He said, ‘Stop thinking too big and narrow it down to the point where you can get it going in 2019,’” Caruso says. “‘Then, because it’s portable, we can rearrange the plant and put in some different crushers and bigger surge bins to increase capacity to meet market demand.’

Hit enter to search or ESC to close